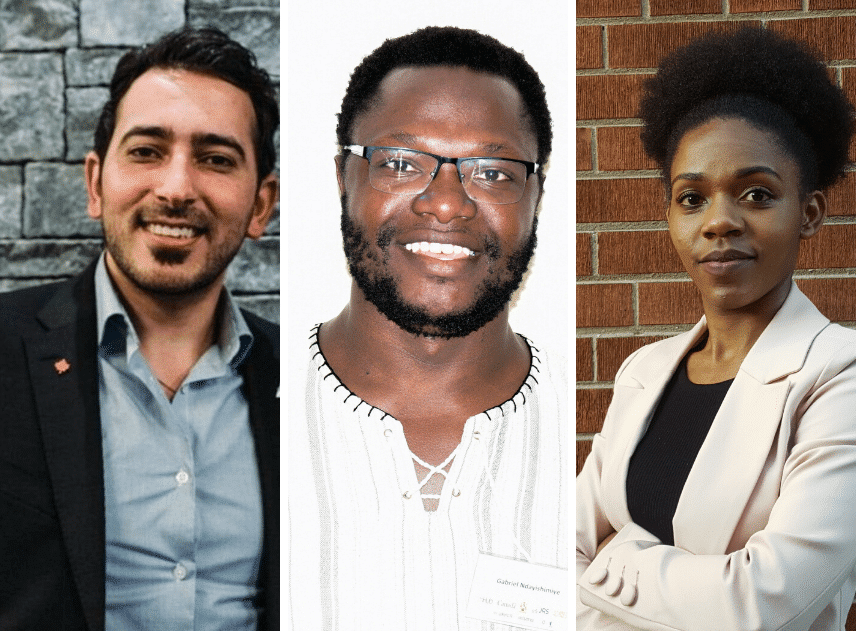 The Student Refugee Program celebrates the class of 2020!

All of Gabriel Ndayishimiye’s hard work over the past few years has recently paid off. This summer, he graduates with a B.A. Honours degree in globalization studies from Huron University in London, Ontario. Originally from Rwanda, Gabriel came to Canada in 2016 through the Student Refugee Program. He will be attending Columbia University in September 2020 to pursue a Master’s degree in African Studies.

“My admission into an Ivy League University is absolutely humbling, especially for people like me. I mean consider where I am coming from, right? I always like to think that my scholarly journey is a testimony to how far youth from marginalized, stigmatized and forgotten communities can go if supported    if given a chance and opportunity to pursue their dreams and aspirations,” says Gabriel.

Take a drive eight hours northeast of Gabriel to Sault College and you will meet another Student Refugee Program alumni who is celebrating their graduation this year. Ahmad Alkosani has just earned his diploma in Business Accounting, as well as a professional bookkeeper certification. Ahmad will be pursuing a Bachelor of Business Administration (BBA) at Algoma University this fall, after which he wants to go further and attain a Chartered Professional Accountant (CPA) designation.

“I feel so good about my graduation. I never thought that I would make it to graduation [because] I first started with a very different education system and different language… with support from teachers, the Local Committee and the College, I made it to [my] graduation [with] honour, and this is not the end of my education journey,” says Ahmad.

Indeed, all across Canada, Student Refugee Program alumni are celebrating their academic achievements, albeit celebrations look a little different this year. One such graduate is Rachel Samuel who has just gotten one step closer to her dream of creating solutions toward accessible, quality healthcare for all by graduating from Queen’s University in Kingston, Ontario with a master’s degree in public health. She looks forward to using her public health skills to develop and implement equitable health solutions for vulnerable and marginalized populations, both locally and globally.

“My dream growing up was to improve people’s lives by addressing the critical need for access to quality healthcare for all.” It really never settled well with me, to see that so many lives were continuously lost, children were orphaned and people’s lives changed forever because of infections that are easily treatable or preventable. I just needed to see a change, and at a young age, I decided that I was going to do all it takes to create the change.” Rachel says.

Gabriel heard about WUSC for the first time in 2004 when he was still in primary school and his teacher was one of the successful candidates chosen by the Student Refugee Program. WUSC remained an abstract idea, until a few years later, when another one of Gabriel’s teachers was selected. He remembers going with his teacher to the Kamuzu International Airport in Lilongwe, Malawi. “I remember [my teacher] standing in front of the airplane, waving [good-bye] to everyone present at the airport. This was my first experience being at the airport and my first time to set my eyes on a landed airplane. This was a transformational experience for me.” Gabriel vowed to take his academic studies seriously, with the goal of applying for the program upon completion of his secondary school studies. A few years later, Gabriel applied for the program and, this time around, he was one of the successful candidates chosen to come to Canada.

Ahmad tells us he was also inspired to apply for the program after seeing the impact it was having on others in his life. He learned about the Student Refugee Program when his older brother became a successful candidate and came to Canada to study at Algoma University. “In 2017 I applied for the Student Refugee Program alongside with more than 500 other refugees in Lebanon. After a long process and passing two different English tests and many interviews, I made my way to be one of the 30 successful candidates,” he says. A year later, he arrived in Sault Ste Marie, where his brother was still residing, enabling a very special reunion.

Rachel first heard about the program when she was in grade three, but says she was still too young to understand what made the program special. “As I progressed with my studies,” she says, “I slowly learnt and understood that the Student Refugee Program was a golden opportunity for refugee students to pursue their academic and career goals given the significant barriers to education that refugees face.” After completing high school, she spoke with multiple students who had already been accepted to the program to learn more and decided to apply.

Adapting to life in Canada

Rachel, Ahmad, and Gabriel all mention the comfort they felt in seeing their respective Local Committees waiting to welcome them at the airport. Ahmad says, “One thing I will always remember is when I landed in [the] Sault Ste. Marie airport, all the members of the college Local Committee were waiting and excited to meet me and welcome me and that made me feel right at home.”

Ahmad recalls his excitement but also his slight apprehension about coming to a place so far away and so different from home, noting “all humans are afraid of change.” Rachel also reflects on the mixed emotions she felt in those early days, “I was excited that finally I was going to pursue my dream but also anxious about what this new beginning meant for me.”

Gabriel recalls the support he received from faculty members and his Local Committee in his first year. Students in the Local Committee introduced him to great social experiences, and the diverse cultures in Canada. His most memorable experience was a birthday surprise when his friends across other campuses in Canada were invited to celebrate with him. “Until then, I [had] never experienced such a thing as a celebration of my birthday. My closest friends, placed at universities across Canada, were invited without my knowledge to London to celebrate with me. That was a huge surprise to me.”

Ahmad credits the support he received from the Local Committee in fostering a smooth integration, but it is also his own hard work and dedication that has taken him so far. Within a month of his arrival to Canada, he found a job on campus. He feels lucky to have had supportive staff who pushed him and encouraged him to be active in his community. He was a full-time student, working part-time and went on to become chair of the Local Committee in his first year. It didn’t stop there for Ahmad. In his second year, he became vice-president of the Student’s Union and was re-elected as Chair with the WUSC Local Committee. Then, not only did he graduate with honours, but he went on to work full-time as the President and CEO for the Student’s Union at Sault College. “[All of this] was quite an achievement for me.”

Advice from our graduates to the next generation

Based on his own experiences, Gabriel has been working on his memoir Run, Elvin for the last two years, where he discusses his journey through refugee camps in Africa to places so far removed from villages that held little promise for him. “My hope is to inspire young people living in refugee situations to be creative and strong in their own way.”

Indeed, in this challenging context of the global pandemic, where many refugee youth are concerned about the impact of the health crisis and border closures on their education and futures, all three graduates have something important to say to the next generation.

Gabriel advises them, “Stay safe, keep faith and push forward. Never allow the storms of life or uncharted waters to dull your passions or discourage you.”

Rachel reminds them, “Take it easy upon yourself because this is beyond your control. It is definitely not easy, but this should be an opportunity to learn to think outside of the box…while approaching life with positivity and gratitude for the little things. In this time more than ever before, let us keep self-care as the top priority.”

Similarly, Ahmad encourages young people to “never give up hope.” He continues, ”There is no shortcut to success [and] all the opportunities will open up to the people who are up to the challenge and who will keep trying new things, exploring, questioning their own limitations and who try to reach beyond their own capabilities. The time we struggle is the time we learn and grow. Our challenges are nothing but opportunities to learn [from] and make us stronger, and if you look back into your life, you realize that you are who you are today, because you stood up for yourself and you committed to success, not failing.”