3 Things to Note in August in Global Development News

Here are some of the stories on global development that caught our attention in August:

1. Four million refugee children are out of school.

A new report by UNHCR on education estimates that four million refugee children are out of school. This represents an increase of half a million children in just one year. Globally, refugees are five times more likely to be out of school than their peers. Read the full report here.

“Education is a way to help young people heal, but it is also the way to revive entire countries. Allowed to learn, grow and flourish, children will grow up to contribute both to the societies that host them and to their homelands when peace allows them to return. That is why education is one of the most important ways to solve the world’s crises.”

2. A UN report labels the Rohingya crisis as genocide.

Following an independent international fact-finding mission on Myanmar, the UN released a report this month which concluded that Myanmar military leaders must face genocide charges. The eruption of violence in August 2017 has since produced the fastest growing refugee crisis in the world, with more than 730,000 refugees fleeing to Bangladesh over the course of just one year. As of May, there were more than 900,000 refugees in Cox’s Bazar (Bangladesh), making the region the home to one of the most densest concentrations of refugees in the world. Read more on the UN report here.

3. DFID released their Summary Commitments from the Global Disability Summit

In late July, the UK Department for International Development (UK DFID), the International Disability Alliance, and the Government of Kenya hosted the first-ever Global Disability Summit in London, UK. Best practices, new policies, and new technologies were showcased, in an effort to generate sustainable commitments from country governments, donors, civil society, foundations and the private sector. Earlier this month, DFID released the full 170 sets of commitments, organized around four pillars: ensuring dignity and respect for all, inclusive education, routes to economic empowerment, and harnessing technology and innovation. The commitments reflected two additional cross-cutting themes of gender equality, and conflict and humanitarian contexts, and an additional focus on data disaggregation. Read the summary of commitments. 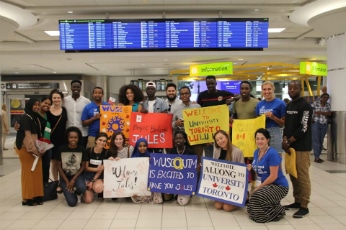 More than 90 young leaders from Local Committees across Canada gathered in Ottawa for a weekend of capacity building, training, and collaboration. This year’s annual Leadership Meeting also had an international component as attendees included youth leaders from Italy and the UK who are part of a movement to create more resettlement pathways through higher education in their countries.